skip to main | skip to sidebar

SONGS OF SUBSTANCE: "Move On" by Stephen Sondheim

I chose, and my world was shaken—so what?
The choice may have been mistaken, the choosing was not.
You have to move on.

Look at what you want,
not at where you are,
not at what you'll be.
Look at all the things you've done for me:
opened up my eyes,  taught me how to see,
notice every tree,
understand the light,
concentrate on now.

I want to explore the light.
I want to find how to get through,
through to something new,
Something of my own—move on.
Move on.

Stop worrying if your vision is new.
Let others make that decision—they usually do.
You keep moving on.

Look at what you've done , then at what you want,
not at where you are,  what you'll be.
Look at all the things you've done for me.
Let me give to you something in return.
See what’s in my eyes
And the color of my hair
And the way it catches light
And the care
And the feeling
And the life moving on!

Anything you do, let it come from you.
Then it will be new.
Give us more to see…

I first encountered this song back in 1995 on a VHS tape of the musical, Sunday in the Park With George, borrowed from a public library in Manchester, CT. It was highly providential at the time. I was going through a huge life transition. As I watched and listened--sitting alone in the living room of my apartment, living by myself for the first time in my life--I felt as if it had been written just for me. It was one of life's pivotal moments.

The life I'd known before had crumbled and been swept away in the past, swift six months. Having no idea how to move forward, I had made a start. I wondered what shape my new life would take. The music within had begun to awaken after more than a decade of silence.

This song was a voice reaching across the void to give instruction. It was the lifeline I needed create the new life, one that reflected the person and vision I'd held inside all those silent years.

Another decade and a half have past since I first heard "Move On". It had slipped from memory, though over that time I've come to live and work full-time as a musician and artist.

The song surfaced again a few weeks ago as I looked though my studio library for suitably challenging material for one of my more advanced voice students--a high school senior who has studied voice with me since she was 10 years old. Next fall she'll be a voice major on scholarship at Temple University in Philadelphia. For her, this is a time of endings and beginnings, the last two months of her senior year, bittersweet and exciting. I was searching for a song that would capture this moment and hint at all that lies ahead. I opened "All Sondheim, Volume IV" and there it was, page 185.

"Move On" is a song of deep meaning for anyone in transition.

In the arts, aren't we always in transition from what we've just created to what we are about to create? If we have the courage to move on and get it done.

Isn't life a perpetual transition, meaning in motion? Worth singing about. 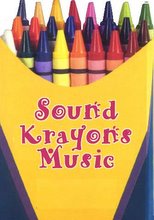 Sound Krayons Music is a teaching and recording studio committed to helping singers of all levels as they develop their voices, build performance skills and learn to communicate with audiences through song. Kay Pere presents entertaining and informative vocal workshops for groups at conferences and for organizations across the US. Kay has taught private voice lessons from her studio in Connecticut since 1997.

KAY PERE
Kay is a multi-dimensional performing songwriter, visual artist, writer, educator and activist whose work embodies a message of hope, healing and humanity. When she isn't traveling to perform, present workshops or show her artwork, Kay lives a quiet little life in a Mystical corner of southern New England.